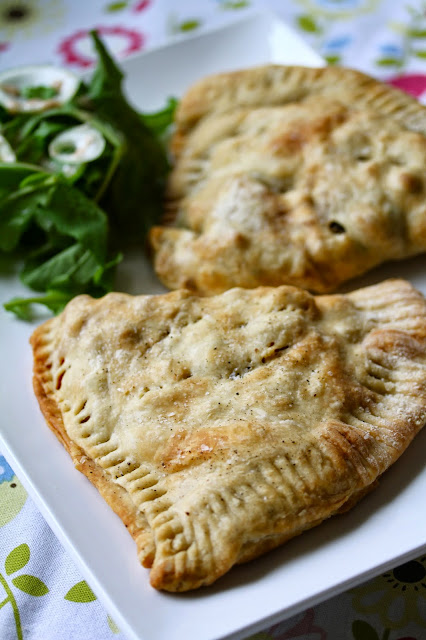 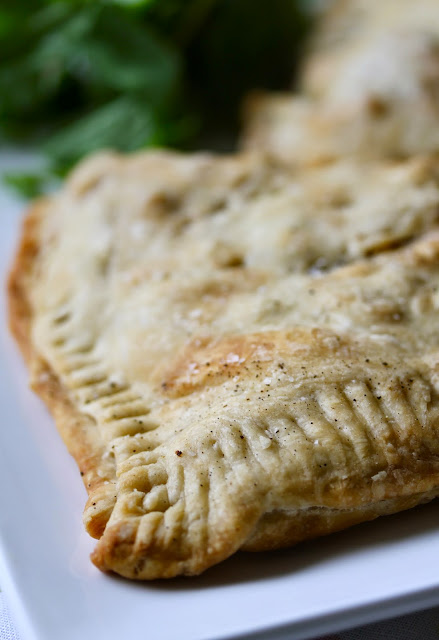 This recipe calls for using packaged pie dough (2 rounds) but I couldn’t find vegan pie shells so I made my own.  The filling makes for a pretty full stuffing, but you may have some left over filling, depending on how full you make the pies.  We made an arugula salad to go alongside.

Preheat oven to 425 degrees.  Heat some oil to a sauté pan and add carrots, parsnips, onion, garlic and potatoes.  Saute until somewhat tender.  Add peas, Worchstershire sauce, a sprinkling of flour and seasoning and mix through for a few minutes.  Let cool, or cool in the fridge before adding to the pie dough.

Unroll the pie dough and cut each round in half.  Spoon one-quarter of the filling on one side of each semicircle and fold in half to form a wedge.  Crimp the edges with a fork to seal.  Transfer to a baking sheet; cut two or three slits in the tops.  Sprinkle with salt and pepper (optional).  Bake until deep golden brown, about 20 minutes.

***If not using premade pie crust, below is the recipe I used.

I admit I am not a good baker.  Even if I follow the recipe to a t, something is always amiss.  This recipe calls for 1 & 1/4 cup water and I didn’t even use all the water and the dough was still watery so I added a bit more flour to it and it turned out fine.  I would suggest to add the water slowly in case you run into the same problem.  I will be using this recipe as my go to because it was a bit flaky and browned very nicely.  I added salt and pepper to the top for a little extra flavor.

Put the flour and salt for crust in a small bowl.  Add canola oil and stir into flour until oil is distributed in pea-sized pieces.  Add cold water (a little at a time) and mix just until mixture forms a ball.  Refrigerate for 10 minutes.  ***recipe said to add more water if needed, I only used about 1/2 the recommended water.

***I divided dough into two balls.  Place ball of dough on a piece of floured wax paper.  Sprinkle ball of dough with a little more flour.  Place another piece of wax paper on top of ball of dough and push down to flatten.  Using a rolling pin, roll dough as think as possible between the two sheets of paper.  Refrigerate rolled out dough until ready to use/fill.