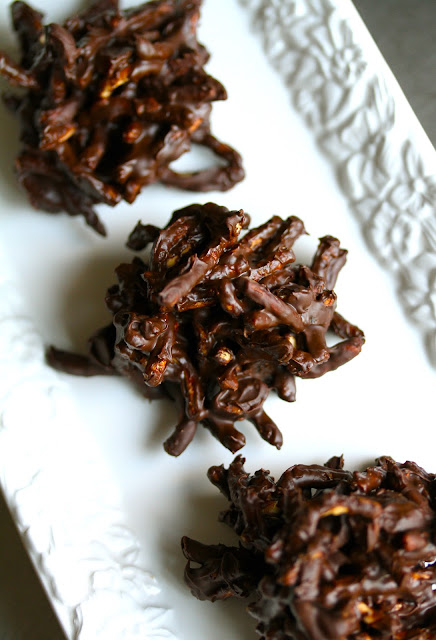 These are fun to put out at a party because they look so unusual and I must say they are a bit addicting so make enough to keep for yourself.

Line a baking sheet with parchment or wax paper.

Place the chocolate in a small bowl over a saucepan of simmering water.  Stir occasionally until the chocolate is melted and smooth, about 4 minutes.

Combine the noodles, almonds, apricot, cayenne pepper if using and melted chocolate in a large bowl.  Stir until all the ingredients are coated with chocolate.  Scoop the mixture onto the prepared baking sheet using a 1/4 cup ice cream scoop and allow the cookies to harden at room temperature, about 2 hours.  Store in airtight container at room temperature.
Posted by Ramona & Kevin at 2:35 PM No comments: 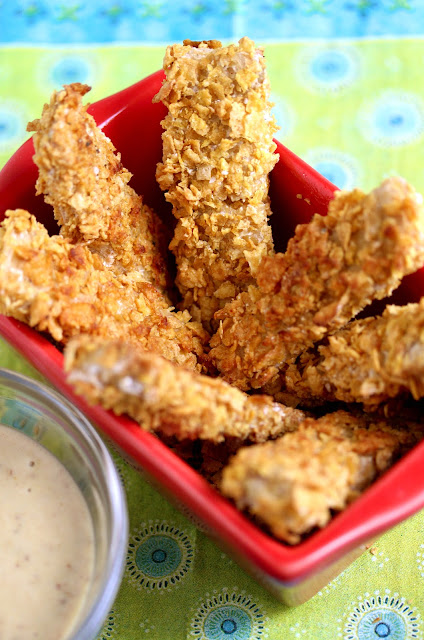 This is some good snackin' food!

Steam or boil Tempeh for approximately 10 minutes, to release bitterness.

Add vinegar or lemon juice to soy/nut milk and set aside.

Put flour in a bowl and add any sort of seasoning you like, I added a bit of garlic powder, salt and pepper.  In another bowl, add crushed corn flakes (put flakes in a plastic ban and crush with rolling pin).  I kept the crumbles pretty big.  Add salt and pepper to flakes.  Add milk and lemon juice or vinegar to third bowl.

Once tempeh has cooled, slice in half to make thinner then cut into strips.

Dip each “finger” in flour first, then mock buttermilk, then in corn flake crumbs.
Place each piece on a prepared baking pan.

Preheat oven to 400 degrees.  Bake approximately 10-15 minutes – making sure outside is nice and crispy.

Serve with the mustard sauce.

***rule of thumb for making buttermilk, 1 tablespoon vinegar then fill up measuring cup with milk to equal one cup. 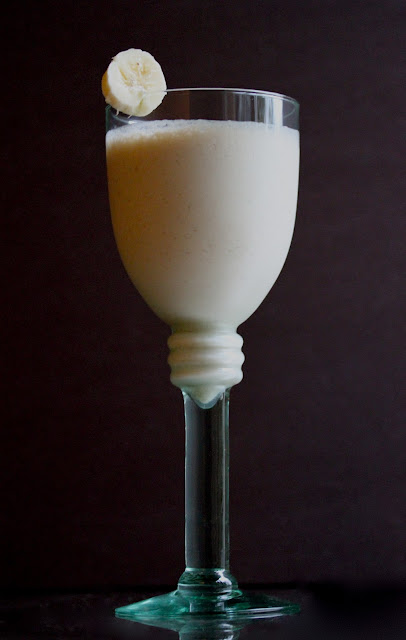 You know it's going to be a good day when you start your day with a Banana Ginger smoothie!

In a blender, add the ice, milk, soy yogurt, bananas, and ginger.
Blend until smooth.
Add agave as needed. 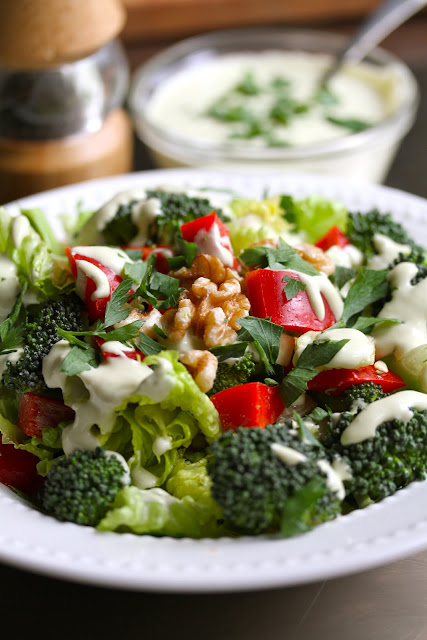 Since this dressing has a nice onion flavor and is on the thicker side, I thought it would also be good as a dip. In fact, we couldn't stop dipping our fresh farmer's market red peppers in it!!  If dressing gets too thick, just add a bit of water to thin out.

Using a blender, mix all ingredients, including pepper to taste.
Posted by Ramona & Kevin at 1:10 PM 1 comment: 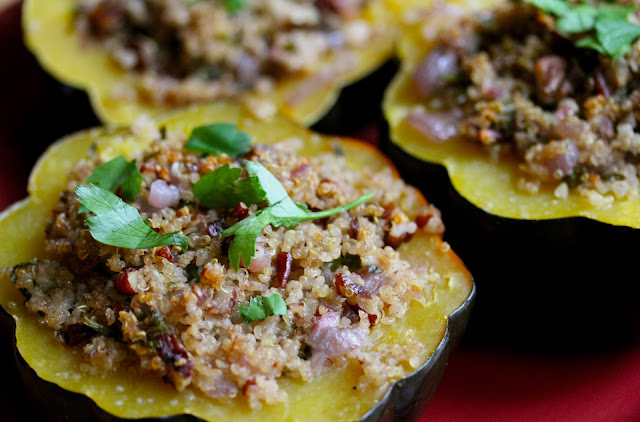 This would be a great dish for a holiday dinner.  We poured a little mushroom gravy on top which made it taste like stuffing and went well with the sweetness of the squash.

Rinse quinoa several times to help remove saponin, which can make the grain taste bitter if not rinsed off.  Bring quinoa, 1 cup water and pinch of salt to a boil in a saucepan over medium heat.  Reduce heat and cook, covered, over low heat until quinoa is tender and fluffy and water is completely absorbed, about 25 minutes.

Preheat oven to 350 degrees.  Lightly oil a baking dish large enough to hold squash. Cut the bottoms off the acorn squash just enough so that each half sits squarely, cut side up.  Arrange the squash halves in prepared baking dish.

Combine cooked quinoa, pecans, onion, a light drizzle of oil, parsley, spices, raisins and a little salt and enough bread crumbs to make a stuffing that holds together. Divide stuffing among squash halves. Filling them abundantly. Top with a dab of Soy Margarine if you have on hand.

Add a little water to the baking dish. Cover tightly with foil and bake 1 hour, until the squash pierces easily with a fork.  Remove cover and bake about 5 minutes to firm the filling.  Serve warm.

I topped with a mushroom gravy that I made with vegetable stock, mushrooms (cooked), dash of soy sauce and flour for thickening.
Posted by Ramona & Kevin at 8:40 AM 1 comment:

Pumpkin Pie for the Pups Muffins 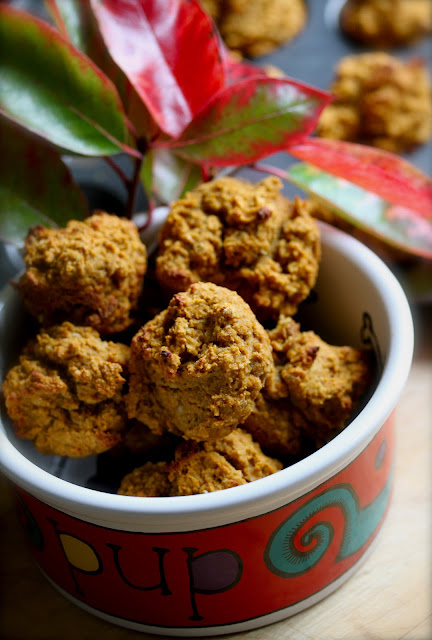 Since the girls were so good all week, I thought I'd whip up a few Pumpkin muffins for them to enjoy.  More dog biscuit/muffin recipes, please visit   www.ramblingvegans.com

Pumpkin Pie for the Pups Muffins

Biscuits- Reduce water by ¼ cup and eliminate baking soda. Knead into a stiff dough, adding ¼ cup of flour at a time until it can be rolled out without sticking to the rolling pin (add a bit of water if it gets too dry). Roll out onto a floured surface to ¼ inch thickness. Cut with cookie cutters or knife and bake on a greased cookie sheet until crispy.

Cookies- Add ¼ cup of flour at a time until dough is firm enough to form into balls. Place dough balls on a greased cookie sheet and press flat with your hand or a fork. Bake until crispy.

Bagels- Make the same as the cookies except do not press them flat. Dip your finger in water and poke a hole in the middle of the dough ball. Flatten slightly to form a bagel shape. Bake until crispy.
Posted by Ramona & Kevin at 3:25 PM 2 comments: 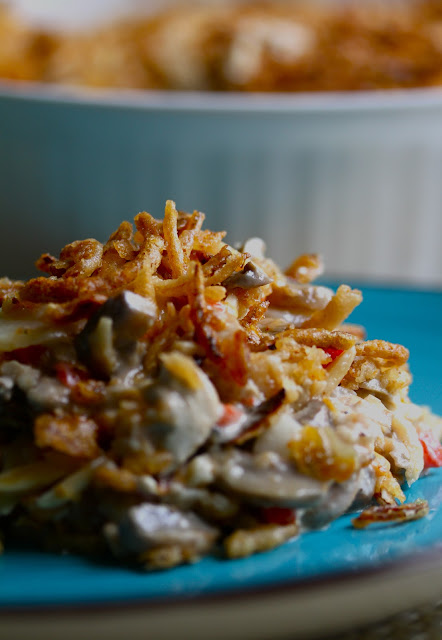 Kevin and my dad both love this dish - especially the next day.  It has just the right amount of tang to it.   If you're not a fan of soy meat, it can also be made with Tempeh and it's just as tasty.  The chick-less pieces can be left as strips but I'm not crazy about the chewiness so I prefer to shred or cut into tiny pieces.