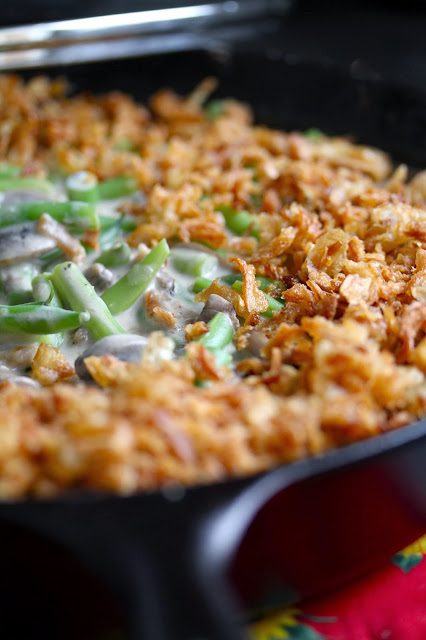 If you missed out on making Green Bean Casserole for Thanksgiving, you may want to try this version for your upcoming Holiday spread.  It's a fresh twist on the original canned Green Bean Casserole recipe.  I still used the store bought fried onions, why mess with what works.

Bring 6 quarts water to boil in a large pot.   Fill a large bowl halfway with ice cubes and add some cold water.  Set a colander squarely inside the ice bath.  Then colander will keep you from having to pick the ice out of the beans.

Beans:  When the water boils, add 2 tablespoons salt and the green beans.  Cook until the beans yield slightly when pierced with the tip of a knife, 4 minutes.  Using a strainer, remove the green beans from the hot water and transfer them to the colander inside the ice bath.  Swirl the beans around in the bath so they cool quickly.  Drain and set aside.

Mushroom base:  In a 10 or 12” cast iron skillet or other ovenproof skillet, over medium heat, melt the vegan butter and add the mushrooms. Season with salt, 1 teaspoon of the cayenne (if using), and the mustard.  Stir to blend and cook until the mushrooms give off most of their liquid, 3-5 minutes.  Using a whisk, add the garlic and 2 tablespoons of the flour.  When all the flour has been incorporated, add the vegetable broth.  Bring to a boil.  Taste for seasoning.  Stir in the mushroom soup and sour cream and simmer gently.  Continue cooking over low heat until the mixture thickens, 3-5 minutes.  You should have about 2 cups.
Preheat oven to 350 degrees

Assemble:  Stir the green beans into the mushrooms.  Simmer on the stove over low heat until green beans become tender when pierced with tip of a knife, 10-15 minutes.  Mix in 1/4 of the can of fried onions then top the rest of the mixture with the onions leaving some of the green beans exposed in the middle.  Transfer skilled to oven for approximately 10 minutes to give the casserole that baked
Posted by Ramona & Kevin at 11:24 AM