The original recipe listed BBQ chicken and I thought BBDQ Jackfruit would be a great replacement and super healthy.  Since it takes a little bit of time to prepare the Jackfruit, I made it a day before making the Quesadillas.  If you have extra Jackfruit, just put it in a bun with some pickles and lunch is served. 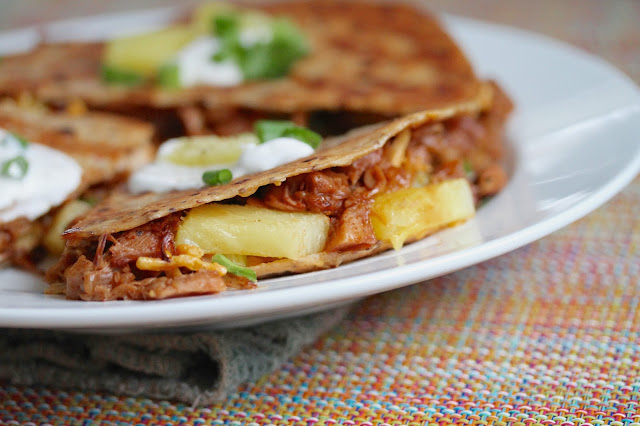 1/2       pineapple (I would not recommend defrosted frozen pineapple)
salt and pepper to taste
prepared Jackfruit (Recommend preparing day before)
(I make with canned Jackfruit in Brine – Not Syrup)
http://www.moreveganblog.com/2014/06/28/bbq-pulled-jackfruit/

Cut the pineapple into 8 wedges and cut off the hard core and the outer skin.
If grilling:  Thread the pieces of pineapple onto wooden skewers and grill over medium-high heat, turning once or twice during the grilling process.

Heat the pre-made Jackfruit in a skillet.

Now assemble the quesadillas.  On top of 1 tortilla, place some BBQ Jackfruit, some pineapple chunks and some sliced jalapeno.

Heat 1 tablespoon vegan butter in a large skillet.  Top the quesadilla with the second tortilla.  Brown on one side, then carefully flip the quesadilla and brown the other side.  Make sure all the vegan cheese is melted.  Repeat to make the rest of the quesadillas.  Then serve with vegan sour, salsa and cilantro.