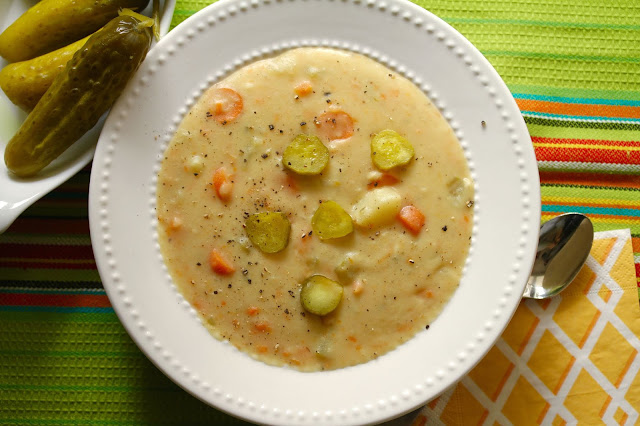 Someone posted a video of Dill Pickle Soup being made and even though I’ve never made it or heard of it before, it sounded interesting. I was hoping it would taste as good as it looked and it did not disappoint.  In fact, it exceeded my expectations.  Cooking note:  Before I added the diced pickles, I used an immersion blender to break-up some of the potatoes (I think I diced too big) but it is not necessary.  Pureeing some of the soup made it like a thick chowder – which I liked.

Instructions
1.    In a large pot, combine broth, potatoes, carrots and vegan butter. Bring to a boil and cook until the potatoes are tender. ***I pureed a bit of the soup at this point to make extra thick but was not in the original recipe***   Add pickles and continue to boil.
2.    In a medium bowl, stir together flour, vegan sour cream and water, making a paste. Vigorously whisk vegan sour cream mixture (2 Tablespoons at a time) into soup. (This will also break up some of your potatoes, which is okay. You might see some initial little balls of flour form, but between the whisking and boiling, all will disappear. Don't panic.)
3.    Add pickle juice, Old Bay, salt (*see below), pepper and cayenne. Cook 5 more minutes and remove from heat. Serve immediately.
4.    *All pickle juice is not created equal. Some is saltier than others. Taste your soup after adding the pickle juice and final seasonings. It's possible you will not need any salt or would prefer more or less.