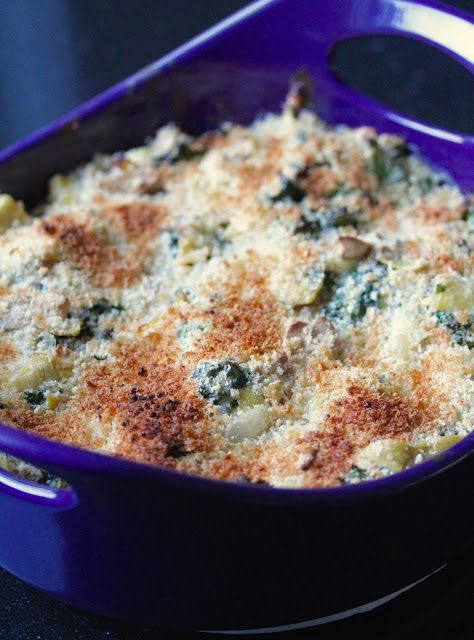 I added a bit of vegan cream cheese and vegan sour cream to make the casserole a bit richer.  I've also included a link to home made vegan Parmesan cheese - it's delicious.

Bring large pot of water to boil.  Add the kale and cook until tender, about 2 minutes.  Drain, squeeze out any moisture and dry very well.

Heat 2 tablespoons of oil in nonstick skillet over medium  heat.  Cut up chicken-less strips into smaller pieces.  Brown and sauté then set aside.  ***I used a bit of soy cause to season.

Reduce the heat to medium.  Add another tablespoon of oil if the skillet is dry, then add the onions.  Cook, stirring occasionally, until softened, about 4 minutes.  Sprinkle the flour over the onions and cook, stirring 1 minute.  Slowly pour in the vegan milk while stirring constantly to dissolve the flour, then stir in the vegetable broth.  ****Add vegan sour cream and vegan cream cheese if using.  Stir in until creamy.

Simmer until slightly thickened, about 2 minutes.  Add the kale, artichokes and cayenne, then add the chicken-less strips.  Cook about 4 minutes.  Stir in 3 tablespoons of the vegan Parmesan.

Preheat the broiler to high.  Spray 8” baking dish. Top with the Panko and remaining tablespoon Parmesan.  Broil about 3 inches from the element until golden brown in spots, about 3 minutes.