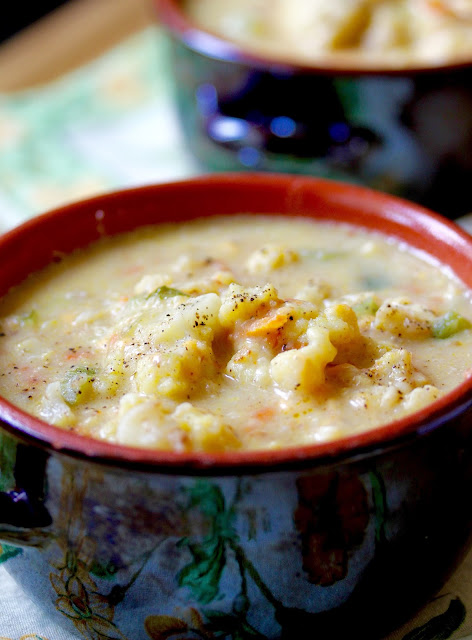 I know it's still hot outside so soup probably doesn't sound that appealing, but try bookmarking this for a cooler night.

**I’ve included the original recipe but note that I roasted the cauliflower to bring out the flavor.  I also added garlic (which I noted and a little more liquid.  I decided to puree some of the soup and keep some chunky.

Original Recipe:  In a large bowl, combine the cauliflower, carrot, celery, water and bouillon.  Bring to a boil.  Reduce heat; cover and simmer for 12-15 minutes or until vegetables are tender (do not drain).

****I placed the cauliflower florets on a baking sheet and drizzled with oil and sprinkled with salt and pepper.  Roasted in a 400 degree oven for approximately 20-25 minutes.  ***Sauted the celery, carrot and garlic in a large saucepan then added the cauliflower when it was finished roasting.  Mixed together a bit then added the vegetable stock.  Bring to a boil for a few minutes since the vegetables are all ready cooked.

In another large saucepan, melt the vegan butter.  Stir in the flour, salt and pepper until smooth.  Gradually add the vegan milk.  Bring to a boil over medium heat; cook and stir for 2 minutes or until thickened.  Reduce heat.  Stir into the cauliflower mixture.

***This is when I pureed some of the soup – original recipe keeps all vegetables whole.  Add vegan cheese, stir to melt.  Add hot sauce if using.